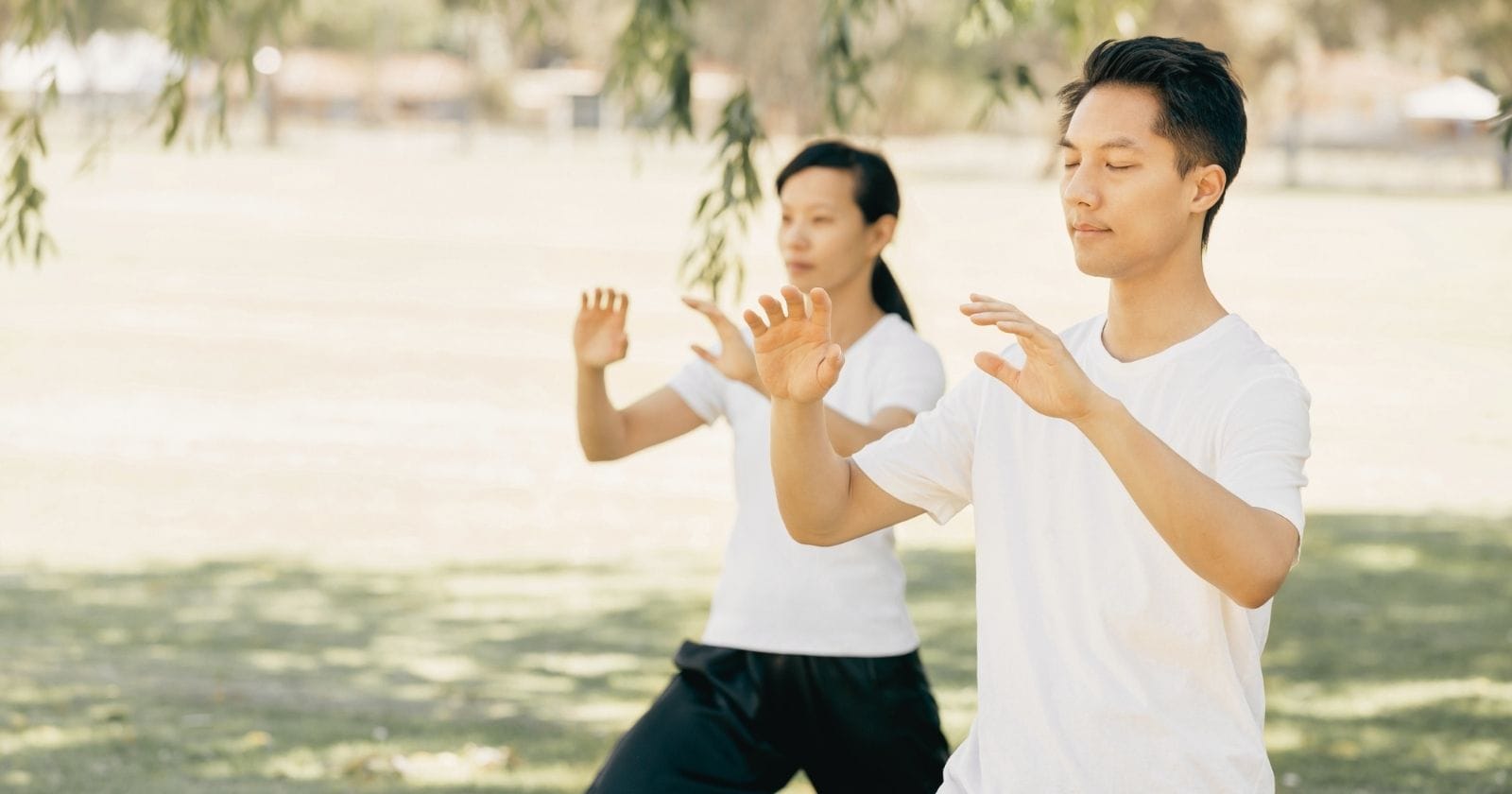 Movement meditation practices like yoga, walking meditation, and tai chi are a way to bring a more active energy to your meditation practice. We often think of meditation as a practice that happens in stillness – but it doesn’t have to be, as long as you’re still paying attention to the present moment, nonjudgmentally.

Some years ago during the course of a 10-day silent meditation retreat, I was introduced to the concept of walking meditation.

At the retreat center, there was a short U-shaped walking trail that led into the woods and circled back to the center.

After spending hours and hours per day in seated meditation, I was eager to try walking meditation, especially if it meant I could give my tired body a break from being seated.

What I noticed was that there’s an entirely different energy I experienced walking in the world with mindful intention versus walking in the world on autopilot. As I moved slowly along the walking trail, noticing leaves crunching and birds chirping and warm sunlight on my arms, I realized that this is also what “regular” life could be, if we could only remember to notice.

To me, that’s one of the beautiful things about movement meditation. You’re teaching your body not just to be mindful while sitting on your meditation pillow, but to be mindful out in the world.

What is movement meditation?

If regular meditation is, as Jon Kabat-Zinn says, a way to pay attention to the present moment nonjudgmentally, then movement meditation is a way to do the same thing while moving.

Of course, there’s a different dynamic between moving and sitting, and the challenges of maintaining your attention are different.

Walking meditation and yoga are a couple of well-known movement meditation techniques. Others, like qigong, are less known. Still others, like dancing and mindful cleaning, aren’t normally thought of as avenues for meditation.

Let’s dive into seven of the most common movement meditation techniques.

Sometimes, sitting meditation just isn’t enough. These seven forms of movement meditation are worth exploring if you’re looking to add a more dynamic energy to your meditation practice.

Walking meditation is simple, and a great place to get started with movement meditation. Walk, perhaps more slowly than you normally would, and as you walk, pay attention to everything you wouldn’t normally pay attention to. Taking your shoes off and going barefoot can help, as can focusing on your breathing.

How does it feel when your feet hit the ground? What do you notice, that you don’t normally notice? What’s the difference between walking with your eyes closed and eyes open?

Perhaps the most well-known form of movement meditation, yoga is an entire practice unto itself. In fact, in a traditional context, meditation is considered to fall under the umbrella of yoga. Yoga is a bigger-picture, all-encompassing philosophy and approach to life.

But the most commonly understood practice in yoga are the asanas, or poses, and that’s exactly what you want to focus on during your movement meditation. Yoga provides an interesting challenge for your mind and body: to continue focusing on your breath, even as you move your body in sometimes strenuous ways.

Tai chi is a physical exercise that involves specific postures combined with slow movements. Originating in China, it’s known as a way to reduce stress in the body, and is particularly popular as a low-impact activity.

Unlike yoga, which is about holding poses, tai chi is defined by consistent, slow motion from one pose to the next. When you watch it, it’s almost as if you’re watching martial arts in slow motion.

Qigong is a practice that combines postures, breathing, movement, and meditation. Originating in China, qigong can include static meditations and postures like yoga, but more often focuses on carefully choreographed dynamic movements.

Important to qigong is the principle of maintaining a balanced, flowing style as you transition from one movement to the next, as well as deep, rhythmic breathing and maintaining a calm awareness.

Qigong is also unique for its interpretation of the movements of animals. Many qigong poses are based around the movements of real and mythical animals like tigers, geese, cranes, and dragons.

Have you ever lost yourself in dancing? Getting totally out of your mind and into the experience of truly inhabiting your body is one of the attractive elements of dancing. Ecstatic dance is one practice that seeks to create the conditions for this to happen by creating a supportive and creative environment for movement in which “anything goes.”

At first glance, dancing doesn’t seem to have much in common with meditation. But if you’re able to dance while encouraging yourself to stay in the present moment, focusing on your breathing, and bringing yourself back to your body when you get distracted by thoughts – that’s it! You’re meditating.

Stretching can be a movement meditation in the same way that yoga, tai chi, and qi gong are. It’s much more unstructured, so you simply need to bring some intentionality to the activity. As you perform your stretches, take a moment to deeply reflect on how your body is feeling. Notice how the sensations in your body change as you stretch in different directions, and as you stretch different parts of your body. Do your best to continue focusing on your breathing while stretching.

Mindful cleaning is an old Zen Buddhist practice. In my mind, it’s one of the great hacks of life because it allows you to multitask while cleaning, and makes the experience of cleaning much more pleasant.

Engaging in mindful cleaning is simple. Rather than rushing through a cleaning task, with mental tension driven by the fact that you wish you didn’t have to be doing it, you instead pay close, careful, loving, curious attention to what you’re doing. Washing the windows becomes not a task you rush through, but a task you let linger. You focus on each action you take, and on how progressively cleaner the windows are getting, and you let your mind be at ease.

When I remember to clean mindfully, a kind of switch fires in my brain. The activity I had just been forcing myself through becomes smoother and easier. There’s a change that happens when I start to pay attention to the details of actually doing it, rather than wishing I wasn’t doing it, or that it would end soon.

In an article by David Cain at Raptitude, he quotes a friend of his who loves washing dishes for its mindfulness benefit:

“Life is composed of primarily mundane moments,” she says. “If we don’t learn to love these moments, we live a life of frustration and avoidance, always seeking ways to escape the mundane. Washing the dishes with patience and attention is a perfect opportunity to develop a love affair with simply existing.”

from David Cain at Raptitude

How to get started with movement meditation

When starting a new practice, it’s easy to get caught up in whether you’re doing it “right.”

That’s especially true for practices like yoga and qigong, which can feel technical and complicated at the beginning. If you find yourself drawn to those practices, try to avoid aiming for perfection. Don’t worry about whether you’re doing it right. Just pull up a YouTube video, do your best, release your expectations, and see how it feels.

If you’re just starting out, perhaps give walking meditation a try. It’s one of the best practices for beginners, and has almost zero learning curve.

And if you’re looking to add a new angle to your meditation and mindfulness practice, dancing or mindful cleaning could be for you.

The more you can release meditation from the confines of your seated practice and into the real world, the more you’ll notice the benefits of bringing awareness into your everyday life.